Here is a talk between two market wizards, Mark Minervini and David Ryan. If you have not listened to it already, I recommend you to listen to it at earliest. You will probably thank me later.

One thing that caught my mind in this talk were Mark’s words, “Try to stack up probabilities/edges in your favour in every trade you make. This way it is not addition, it is multiplication of edges!”. Now many of you might ask, there is only one probability i.e. win rate or probability of being right in the market while trading the market actively. What other thing are you talking about?

Ok, at some level I agree but I also agree to disagree with this statement. Here are some of that probabilities in my opinion that stacked together with your existing edge may do wonder:

In this post, we will examine the result of stacking up various probability in a simple model that is applied on our favorite(at least mine) index ‘BANKNIFTY’.

We will begin with this question, “What is BANKNIFTY’s reaction after it breaks Previous day High or Low?”.

Our idea proved to be a disaster almost every year. After digging into some of the trades in backtest result, I understood there are three main reasons for this:

So, in order to avoid drastic effect of above causes, after giving it lot of thoughts, I came across below setup,

As we can see in the above chart the result improved very much after adding a new constraint. So, What Mark was talking about multiplication of edges not addition is proven to be true.

Still one can argue that the total points captured in this 5 years is not convincing. This is not a good setup to trade. Yes, I agree with this argument but one can further improvize it by adding SL to the initial idea. And instead considering the future, selling slightly out of the money weekly option whenever a signal is generated will give more edge to the system.

As we have seen “Stacking up probabilities/edges” really do wonder for the trader. I would like to conclude this post by quote by Ray dalio,

Happy Trading until then! 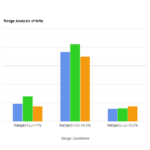 What time does Nifty make a high or low of the day most often?